It is always a heartening experience to be working with volunteers who willingly give up their day or weekend to contribute to a worthwhile cause. One such example was the weeding day recently held at the site of an endangered orchid population in the Clare Valley.

Twelve volunteers met on Saturday 18th June at the site of the largest known population of the White Beauty Spider-orchid Caladenia (syn. Arachnorchis) argocalla. Threatened Plant Action Group (TPAG) members met with Native Orchid Society (NOSSA) volunteers and Clare locals to remove the invasive weed Topped Lavender from an area immediately surrounding one of the larger patches of the orchid.

We were fortunate to have sunny mild weather, and the mood was similarly warm and convivial. People shared experiences and became acquainted with each other while hand-pulling or lopping the small lavender seedlings and shrubs. The orchid was not in flower, although a few leaves had started to emerge.

The White Beauty Spider-orchid is nationally endangered, with a distribution mostly confined to the Clare Valley, and some smaller populations in the Adelaide Hills. The target site for our weeding day has the largest population, and in a good year more flowering plants can be seen here than all other populations combined.

The population was officially recorded for the first time more than 20 years ago, and since then various groups or government agencies have had responsibility for managing the population, including the Northern and Yorke Landscapes Board and Trees For Life. Earlier this year, TPAG secured a Friends of Parks Partnerships Grant to help manage the site for 3 years. Sevenhill Cellars winery is a partner in the project, and is providing a substantial financial co-contribution. General Manager Jonathan O’Neill acknowledges the importance of the population for the species, and is committed to ensuring the project makes a significant difference to the security and future of the orchid.

Already contractors have cleared Topped Lavender from about 8 ha at the site, and our intrepid volunteers added 0.5 ha to the tally. Sevenhill Cellars sustained the volunteers’ spirits with generous servings of chocolate brownies, followed by a hearty soup and slices of pasty at lunch time. A clever ruse, guaranteed to see people coming back next year! 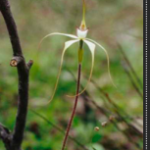