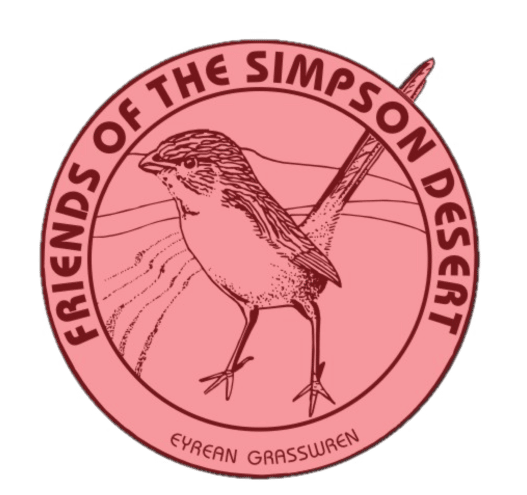 We are pleased to give you an insight into the work done by our group of volunteers. New members are most welcome and have the opportunity to be involved in the project work undertaken by us when we travel to the Simpson Desert.

In recent years the popularity of 4WD vehicles and increased visitation to the fragile lands of the Simpson Desert has placed this unique environment under intense pressure. In August 1986 a group of dedicated volunteers recognised this and under the leadership of adventurer and conservationist, Warren Bonython, Friends of the Simpson Desert Parks (FOS) began. FOS is now one of more than 120 groups incorporated in Friends of Parks Inc.

The parks that FOS are dedicated to preserving wildlife, cultural and heritage sites include:

FOS acknowledges and respects the Traditional Owners whose ancestral lands we work on. We acknowledge the deep feelings of attachment and relationship of Aboriginal people to Country, and also pay respects to Aboriginal leaders past, present and emerging.

Witjira National Park is managed by a Co-management Board, while Kati Thanda-Lake Eyre National Park and Elliot Price Conservation Park is managed by an Advisory Committee.  Both the Board and Committee consists of Aboriginal Traditional Owners from the respective Aboriginal groups and senior Department for Environment and Water (DEW) staff, with on-groundwork undertaken by NPWS Rangers.

- Witjira National Park was gazetted in November 1985 and starts at the entrance to the park in the west to just east past Purni Bore at the start of the serious sandhills in the desert.

If you travel across the Simpson Desert most of your travelling will be within the Witjira and Munga-Thirri Parks boundaries.

Membership of FOS is composed of enthusiastic individuals, couples and families and many of our members are from states other than South Australia. Apart from our working bees in the desert, members meet in Adelaide 2 or 3 times a year for both social and planning events.

The FOS committee meets regularly and also liaises frequently with Department of Environment and Water (DEW) staff to review and plan group activities to widen the group’s effectiveness and propose projects for the future.

The objectives of the group are:

Volunteers are active in the parks during the cooler months, on a variety of projects. Some of our projects are

- Control of non native grasses, weeds and date palm regrowth
- Installation and maintenance of visitor signage
- Monitoring vegetation and dune erosion by photo points
- Installing and maintaining barriers around culturally sensitive sites
- Surveying and monitoring of feral animals like cats
- Revegetation of damaged or destroyed flora
- Construction and maintenance of tourist facilities such as steps into Dalhousie Pool and other infrastructure within the Dalhousie
campground.
- Surveying cultural sites.