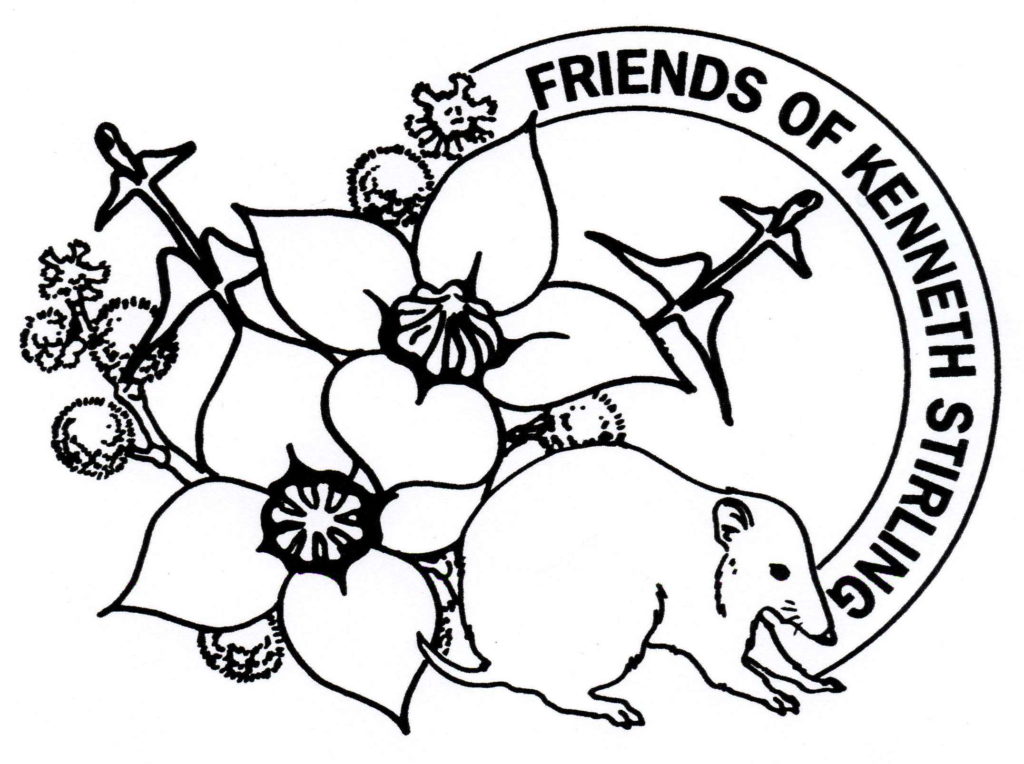 This park consists of four separate reserves in the Basket Range/Carey Gully district:

The names Burdett, White and Wotton refer to previous owners of the land while Filsell Hill denotes the location of the largest reserve which is close to the Filsell Hill Trig Point.

The Kenneth Stirling Conservation Park consists of four areas of valuable remnant eucalypt vegetation, totalling 253 ha in all. Although separate, the four reserves are part of the same natural vegetation corridor approximately 16 km from Adelaide, stretching from Basket Range in the north to Carey Gully in the south, along the second north-south mountain range east of the Adelaide Plains.

The park conserves open forest and open woodland formations of stringybark (Eucalyptus obliqua and E baxteri) with Candlebark (E. dalrympleana) and Manna or White gum (E. viminalis) on the lower slopes.The understorey is diverse and a number of rare and interesting species of plants and animals are present, including the pink boronia, Boronia edwardsii, the Southern brown bandicoot, Isoodon obesulus, and the shy Scaly or Bassian thrush Zoothera lunulata.

The park was established in 1985 with the purchase of two sections of land, Filsell Hill (Forest Range) and Wotton's Scrub (Carey Gully).Further land adjoining Filsell Hill was subsequently purchased with a bequest from Miss Anne Steer.White's Scrub was donated by Mr and Mrs Vern White in 1986 and the Burdett family donated the northern-most section in 1989.

The Park was named in honour of Mr Kenneth Stirling, who, at his tragic early death, left a substantial bequest to the National Parks and Wildlife Service for the preservation of habitat in high rainfall areas of South Australia.

Kenneth Stirling Conservation Park comprises 253 ha in four quite separate parcels of land, mainly stringybark forest, with some gum woodland.Although most of the park was heavily logged in earlier times, much of the land has had little human interference for many years, leaving a fine representative sample of higher rainfall woodland and understorey.The four reserves, Burdett's Scrub, Filsell Hill, White's Scrub and Wotton's Scrub, are part of the same natural vegetation corridor stretching from Basket Range in the north to Carey Gully in the south along the second north-south mountain range east of the Adelaide Plains.High winter rainfall and a cooler climate than most of the State produces dense stands of Stringybark (Eucalyptus obliqua and E. baxteri) with Candlebark (E. dalrympleana) and White or Manna gum (E. viminalis) on the lower slopes.The healthy understorey supports Southern Brown Bandicoots (Isoodon obesulus) Echidna (Tachyglossus aculeata) and Western Grey Kangaroo (Macropus fuliginosus).Rare plants include pink boronia (Boronia edwardsii), Coral Fern (Gleichenia), the diminutive Ploughshare wattle (Acacia gunnii) and many orchids.The endangered Fan-leaved fern (Asplenium flabellifolium) has also been found here.Among the wide variety of birds known to nest in the park are the Yellow-tailed Black Cockatoo, Peregrine falcon, Golden Whistler, Wedge-tailed Eagle and the extremely shy Scaly or Bassian Thrush (Zoothera lunulata).

The area was first opened up in the 1850s and in the early days was mainly used for logging for piles, milling logs, kiln/baker's wood, wooden shingles and for the production of charcoal.The early timber-getters told stories of the "pinkies" (rabbit-eared bandicoots) which once lived in the area, andother "strange" animals, such as bettongs and native cats (quolls).

Other land uses have included grazing and quarrying for building stone and road metal.Probert's Quarry, in the northern section of Filsell Hill, was a source of road metal for the main Adelaide-Lobethal road.In 1931, a huge stringybark tree on the edge of the quarry was torn out by a strong wind and crashed on top of two men and a horse below, fatally injuring one of the men, Ewin Lambert, and killing the horse.A memorial plaque to Mr Lambert has been erected at the quarry by the Friends of Kenneth Stirling Conservation Park and the National Parks and Wildlife Service Heritage Committee.

Gold was found in Forest Range in 1854 and there was a brief but significant gold rush in May-June 1855.The Stony Creek field was a small but rich alluvial field with a number of reefs, producing over 6,000 ounces of gold before the prospectors moved on to Echunga and Woodside.Periodic attempts to find the elusive reefs continued up to the early 1930s.

The Conservation Park was formed in 1985 when the State Labor Government was persuaded to purchase the original Filsell Hill section which had been subdivided and offered for sale.Wotton's Scrub was purchased at the same time, at a total cost of $450,000.The purchase was supported by generous donations from the SA Nature Conservation Society, the National Parks Foundation and individuals from all over the State.The National Trust assisted by providing an interest-free loan of $100,000.The Park was named in honour of the late Mr Kenneth Stirling, who, prior to his tragic death in 1973 aged only 38 years, had given a substantial donation for the acquisition of land for a national park in high rainfall areas of the state.

Additional parcels of land were added to the park over the next four years from 1985 - 1989.General donations of land were made by Mr Vern and Mrs Margaret White (White's Scrub) and the Burdett family (Burdett's Scrub).Further land adjoining Filsell Hill was purchased with the assistance of a bequest from Ms Anne Steer.

The Friends of Kenneth Stirling Conservation Park was formed in 1996 and maintains a small but dedicated membership committed to maintaining this valuable area of remnant native vegetation.The group's logo represents distinctive characteristics of the Park.The four-petalled pink boronia, Boronia edwardsii, represents the four sections of the Park.Fauna is represented by the Southern Brown Bandicoot, Isoodon obesulus, whilst the Ploughshare Wattle, Acacia gunnii, emphasises the uncommon plants found there.