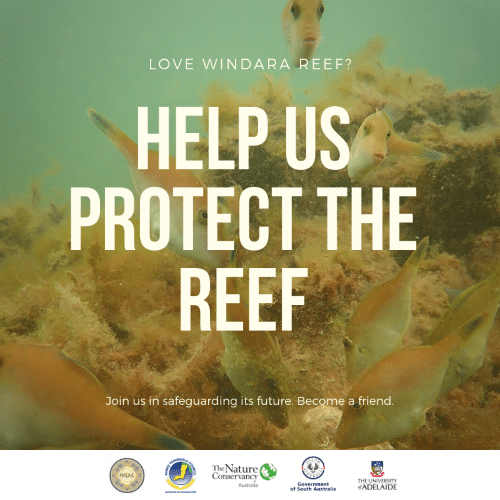 Windara Reef is the largest shellfish reef restoration project ever attempted in Australia. Using proven methods of restoring lost shellfish reefs in southern Australia, The Nature Conservancy, along with project partners the Australian Government (through its National Stronger Regions Fund), South Australian Government, Yorke Peninsula Council and the University of Adelaide, are creating Windara Reef off Rogues Point, Yorke Peninsula in the Gulf St Vincent. As a result all the social, economic and environmental benefits of shellfish reefs – like more fish, cleaner water and increased biodiversity – are bouncing back.

The word ‘Windara’ is the Narungga (traditionally spelled Nharangga) name for the eastern area of the Yorke Peninsula Region. Narungga was made up of four clans which shared the Guuranda (the Yorke Peninsula), separated into Kurnara in the north of the peninsula, Dilpa in the south, Wari in the west and Windara in the east.

Restoring this reef is critical to improve marine biodiversity, fish production and water quality in the Gulf. The project will result in economic and social benefit to the nearby communities of Yorke Peninsula through the creation of new jobs, increased aquaculture, ecotourism and recreational fishing opportunities, as well as new volunteering and community education programs.

The reef is already showing promising indicators that it is on track to be a success but it’s still early days yet where colonising species like sponges and algae are dominant however schools of leather jackets, the occasional weedy whiting, snapper, cuttlefish, scallops and many different species of crabs are being seen. The project’s scientific surveys also confirmed oysters are surviving with wild oyster recruitment on the newly built limestone reefs. This wild recruitment will support hatchery reared oyster deployments improving the long-term sustainability of the reef.

Windara Reef has been built in two phases involving creating a limestone reef seeded with Australian Flat Oysters. The first four-hectare reef was delivered by Primary Industries and Regions South Australia (PIRSA) in June 2017 and The Nature Conservancy expanded the reef up to 20 hectares in October 2018. Over seven million oysters were deployed onto the limestone reefs in 2019.

The Friends of Windara Reef aim to be involved in all aspects of the reef’s development and sustainability, for example:

Friends of Windara Reef hold regular meetings and activities during the year.